We are studying the properties of the Universe and the fundamental laws of physics by use of small-scale table-top experiments.  The principal activity is presently a search for galactically-bound cold dark matter (CDM), the Haloscope At Yale Sensitive To Axion CDM (HAYSTAC).  This effort is supported by the Heising-Simons Foundation, by the National Science Foundation, and by Yale University. 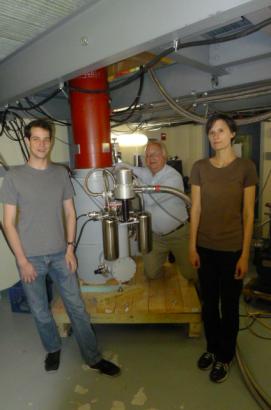 The HAYSTAC detector system is shown in the photo to the left, with Ben Brubaker (graduate student), Steve Lamoreaux, and Yulia Gurevich (former postdoc, now a Marie Curie Fellow at the University of Heidelberg).  The laboratory is part of the Wright Laboratory of Yale University, and is in Room 326 of Wright Lab West.

In past years, we had two main experimental projects located at Yale. One was a search for the permanent electric dipole moment (EDM) of the electron. The electron EDM can only exist if the laws of physics violate time-reversal and parity symmetries. The existence of such an EDM at a measurable level is predicted by a number of particle-physics theories beyond the standard model of electroweak interactions, such as Supersymmetry. The other project was a study of the Casimir force. This is a force between two bodies due to quantum vacuum fluctuations around and in between these bodies. We used a torsion pendulum apparatus to study this force under various conditions. The Casimir measurement apparatus is still functional, awaiting a new project.

August 31, 2016
The first long data run of the HAYSTAC detector was completed in August 2016.  The data was taken in two groups, from January to March, and then from May to August.  The run...

April 8, 2015
Funding for an axion galactic dark matter experiment, operating at higher frequencies than previous work, by the Heising-Simons Foundations is announced in a Yale Newsletter...
END_OF_DOCUMENT_TOKEN_TO_BE_REPLACED