A wealth of astronomical data indicates that most of the matter in the Universe cannot be seen directly with any observational instrument that exists today (telescopes, radiotelescopes, etc.).  This type of matter is termed “dark matter” but perhaps is more aptly thought of as invisible matter. Dark matter accounts for about 27% of the mass of the Universe, while the usual matter that the Earth and all we interact with accounts for only about 5%.  The rest of the mass comprises “dark energy” which appears as even more mysterious than dark matter.

Despite decades of effort to detect dark matter, its composition and specific characteristics remain unknown, other that it is bound to galaxies (and is therefore “cold”) and interacts gravitationally.  Over the years, many models and ideas have been forward as to the composition of dark matter, but so far none have proven to be correct.

Our work is aimed at detecting dark matter in the form of Axions which are very low mass particles that are predicted in the context of the standard model of electroweak interactions (quark, gluon, W, Z, Higgs, etc. are all part of this model).  The axion was introduced to explain why certain parameters (angles) in the standard model are extremely small (less than one billionth of a radian) when those parameters could be any value at all.

Our experiment makes use of the fact that axions, if they indeed exist and form dark matter, will convert to radiofrequency photons in the presence of a strong magnetic field. The photon energy, hence frequency, is essentially determined by the axion mass, and is expected to be in the 1-20 GHz region. The heart of our experiment is a tunable radiofrequency (microwave) cavity resonator, which serves to build up the axion signal, and a quantum limited amplifier based on the Josephson effect which occurs when Cooper pairs tunnel though an insulating layer separating two superconductors.

Because the axion mass is unknown, the hunt for axionic dark matter is a slow search; the cavity resonance frequency is stepped slowly, with a putative axion signal appearing as noise in excess of the system noise, as compared to the nearby frequencies.

To achieve the physical limit of the experiment sensitivity, the cavity and amplifier must be kept at a temperature of 0.1 K above absolute zero. The magnet which allows the axions to convert to photons is also superconducting, with a field of 9 Tesla. 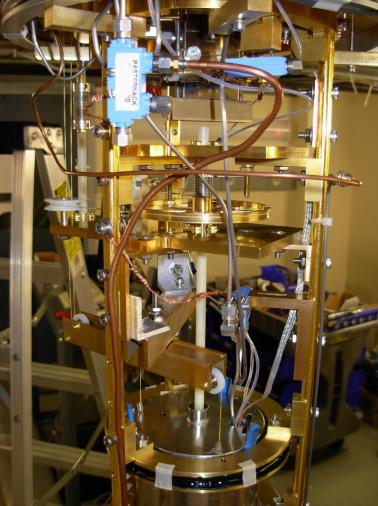 The photo to the left shows the tower structure that carries the dilution refrigerator used to attain 0.1 K or below (upper region), the tuning mechanism and superconducting bucking coils, some of which encircle the silver magnetic shield can that contains the Josephson parametric amplifier (JPA), with the copper plated cylindrical cavity at the bottom. Because the JPA is very sensitive to magnetic fields, a critical design issue was the shielding of the 9 Tesla magnetic field which is located less than a meter from the JPA.

The photo to the right shows details of the internal tuning mechanism that is part of the system that transmits motion at room temperature to the coldest part of the experiment.  Also visible are the control lines (Kevlar strings)  for the antenna adjustment and fine frequency adjustments.

In addition to the tuning of the cavity, the coupling of energy from the cavity also must be adjusted. This is accomplished by inserting or withdrawing a small antenna, formed by a few mm of the inner conductor extending from the end of a rigid coaxial cable.

We are planning to take our first production run in early 2016 and we anticipate attaining a physically interesting level of sensitivity.

Work to improve the experiment sensitivity by about an order of magnitude is being done in parallel with the operation of the experiment.

In 2008 Nobel Prize in physics was awarded to Yoichiro Nambu “for the discovery of the mechanism of spontaneous broken symmetry in subatomic physics”, and to Makoto Kobayashi and Toshihide Maskawa “for the discovery of the origin of the broken symmetry which predicts the existence of at least three families of quarks in nature”. The study of nature’s broken discrete symmetries (charge conjugation C, parity P, and time reversal T), however, is far from complete. CP-violation is described within the Standard Model by the complex phase in the Cabibbo-Kobayashi-Maskawa quark mixing matrix. It is also well known that this mechanism of CP-violation is not strong enough to explain the observed matter-antimatter asymmetry of the universe. In addition, almost every conceived extension of the Standard Model includes new scalar fields that allow new complex phases, and therefore new sources of CP-violation. We study CP-violation by searching for permanent electric dipole moment (EDM) of the electron in solid ferroelectric ceramics. 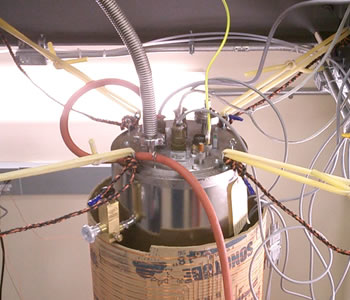 The study of Casimir effect tests our fundamental understanding of quantum field theory, electrodynamics, and statistical physics. Zero-point quantum fluctuations in vacuum separating two macroscopic or microscopic bodies give rise to a force between these bodies. Interest in Casimir effect has recently been on the rise, owing partly due to possibilities of controlling and counteracting attractive Casimir forces, for alleviating friction and stiction in MEMS (micro-electromechanical systems) and NEMS (nano-electromechanical systems).